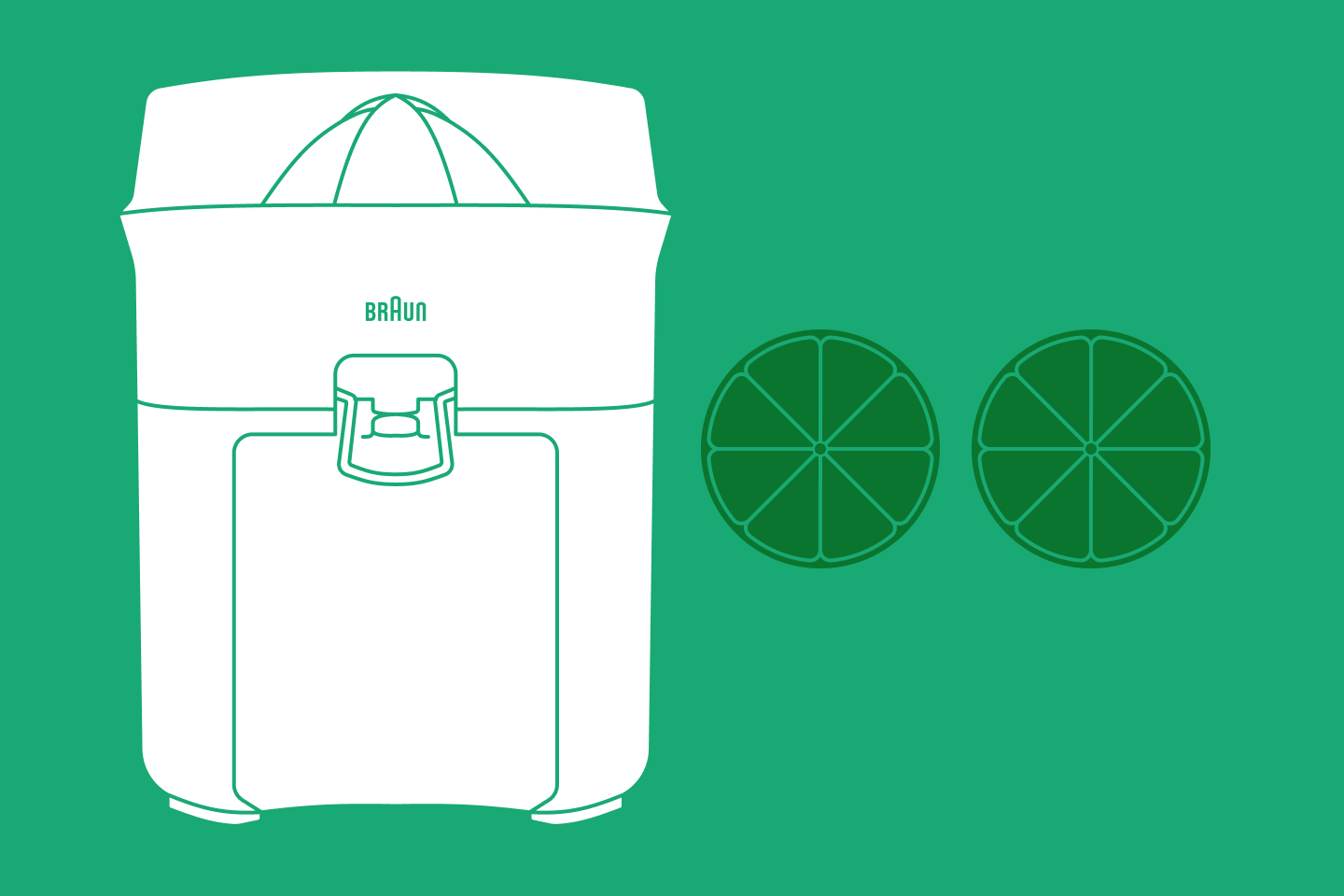 In this essay, I mistakenly attribute the design of the MPZ2 solely to Dieter Rams. The initial design and prototypes were actually executed by Gabriel Lluelles Rabadá, the head of design at Braun Española SA. I’ve written an entire essay about him here.

Recently, anytime I intend to purchase a new object, I try to find a decades-old second hand one instead of buying new.

It’s because, save for new technologies that previously didn’t exist, most of the objects we surround ourselves with are very similar to when they were first invented. The more “low-tech” an object is, the less it has likely improved the beginning.

Given that trend, an object that still exists and operates well decades later is likely designed and built better than most new ones you could find today. This can be explained by the Lindy effect, which essentially states that the longer something has survived so far, the longer it is likely to survive in the future.

Here in California, we are blessed with nearly year-round availability of fresh, locally-grown citrus, especially oranges. What better way to enjoy them than to make fresh-squeezed juice?

I started doing some research into the best orange juicer I could find. In my search, I stumbled upon a motorized citrus juicer, the Braun MPZ 2 Citromatic. Its simple, unadorned shape immediately spoke to me. For less than 20 dollars, including shipping, it was a bargain.

It has a long history of nearly half a century in the making.

“citromatic” is an electric citrus juicer and was first devised in 1972, after Braun acquired the Spanish company Pimer and started to produce new equipment at the latter’s Barcelona location. The product, also known as “MPZ 2” is the joint brainchild of Dieter Rams and Jürgen Greubel. Intended specifically for the Spanish market, it soon became a longseller on a whole host of markets.

It went on to sell for nearly 3 decades, undergoing only minor changes during its life. Even though it was discontinued in the 90s, an updated version was released a few years ago.

What makes it so long-lasting is its simplicity. The electronics are uncomplicated, it’s just a switch and a motor. Mechanically, the device is quite simple as well and likely never needs replacement parts.

This juicer not only enchanted me while I was searching a few months ago. Forty years ago, it captivated none other than a young Jony Ive.

When I was a young boy growing up in London, my parents bought a wonderful juicer. It was a Braun MPZ 2 Citromatic. I Knew nothing about Dieter Rams or his ten principles of good design. But to a little boy uninterested in juicing, I remember the Citromatic he and his team designed for Braun with shocking clarity. It was white. It felt cold and heavy. The surfaces were without apology, bold, pure, perfectly-proportioned, coherent and effortless. There was an honest connection between its blemish-free surfaces and the materials from which they were made. It was clearly made from the best materials, not the cheapest. No part appeared to be either hidden or celebrated, just perfectly considered and completely appropriate in the hierarchy of the product’s details and features. At a glance, you knew exactly what it was and exactly how to use it. It was the essence of juicing made material: a static object that perfectly described the process by which it worked. It felt complete and it felt right. While my memories are, of course, in the past tense, the product remains all these things. I was completely enchanted with it then, and I now find, with surprise, that this object resonated so deeply with me that nearly forty years on I remember my sense of it with startling clarity.

I don’t think I could better capture why this object is such a pleasure to behold and use.

The Citromatic is successful because it flawlessly merges the way it works with the way it looks. This perfection continues into the smaller details that aren’t obvious at first glance.

For example, the spout can be raised and lowered to stop the flow of juice. This makes it easy to replace a full glass with an empty one. 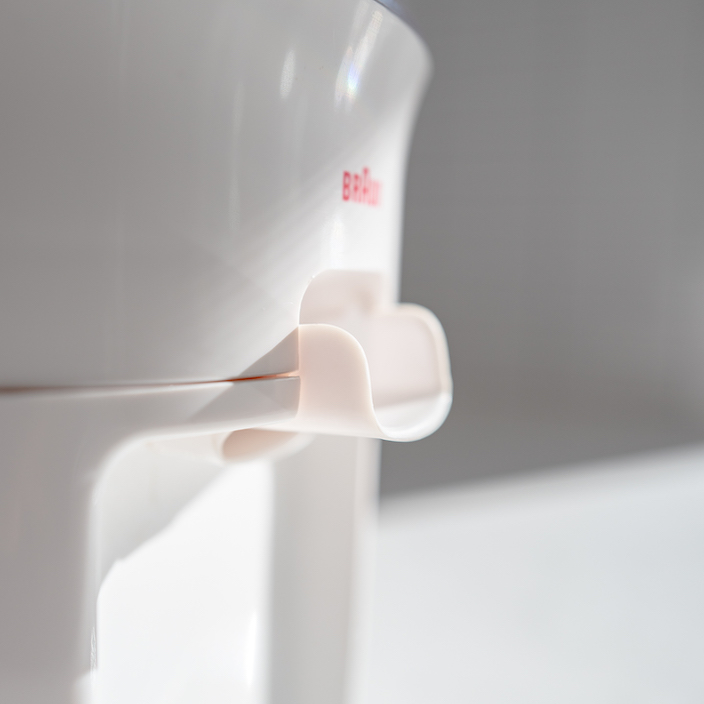 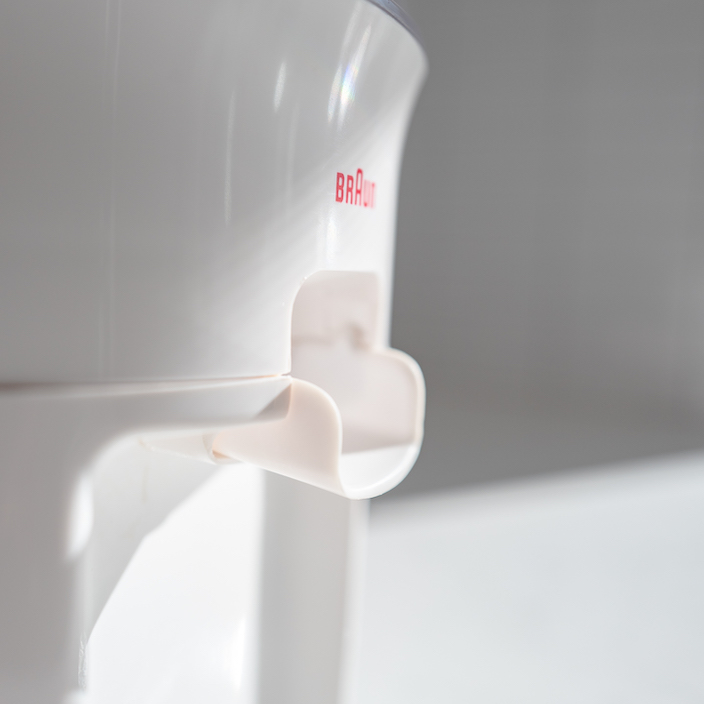 After making some juice, cleaning is a breeze. The top of the unit separates into individual pieces, leaving just the motor mechanism below. Each of these pieces is easily washed before the next use.

It’s the small details like this that make an object such a joy to own. Importantly, they speak for why people are still using these decades later.

Nearly every week since we bought the MPZ 2, we’ve made fresh orange juice over the weekend. As much as the juice is delicious, the ritual of making the juice is nearly as satisfying.

This step is the most important. Hand-select the freshest, ripest oranges. It’s a luxury that stores and restaurants that serve fresh juice don’t have because of the scale they operate at.

I prefer to buy Valencia oranges from my local farmers market. They should be a bit soft, yet dense. Stay away from hard and hollow-feeling oranges. Those can be fibrous and tough.

If you like your juice chilled, place the oranges in the fridge for a few hours at minimum.

After washing, we like to roll the oranges on a cutting board while applying firm pressure to break up the membranes within that hold the juice.

Then cut the oranges in half against their central axis. A sharp knife makes this safe and effortless.

This is the most satisfying step. Place a glass under the spout and push one orange half down on the juicer. This is where the MPZ 2 dissolves into the background. The focus is now on the transformation of the orange into a cold glass of juice.

The motor inside emits a whir but isn’t loud or cacophonous like a blender. It turns with enough speed and torque to extract the juice, but not enough to hurt its operator.

This last step is what makes the rest worth it. My wife and I love to sit down together in the middle of a long day of tidying up the house to sip on cold juice and spend some quality time together. There really is nothing like a glass of orange juice that I make with my own hands.

As winter gets closer, I’m excitedly waiting to start juicing the wider variety of citrus that I’ll find at the local farmers market.